Ken Schrader to run the LRR 100

LONDON, ON - The APC Series is thrilled to announce that Ken Schrader will be participating in the London Recreational Racing 100 on Saturday July 21st at Millgorve Ontario’s Flamboro Speedway. Schrader will be making his 3rd career APC Series start after being a part of the double header event last season at Jukasa Motor Speedway. Schrader will dawn the Federated Auto Parts and APC Auto Parts Centres colours this weekend for the event. Schrader will be once again be behind the wheel of a Laking Motorsports prepared machine, and will be sporting the familiar Laking No. 44. Steve Laking, an APC Series regular since its inception in 2015 has been behind the wheel most of his events, however he will be transition to the car owner role for the LRR 100

“I like the “owner” role” stated Laking. “I’ve been a driver for 29 years so it’s fun to change it up a little, especially with a fun and down to earth guy like Ken.” – continued Laking about the transition from driver to car owner.

Ken Schrader, a veteran of nearly 30 years in NASCAR, has multiple cup victories to his name to go along with nearly 50 years of racing experience in almost every type of race car under the sun. These days Ken can be found racing his dirt modifieds frequently throughout the racing season, however he climbs behind the wheel of asphalt cars from time to time. Ken was asked about the transition from dirt to asphalt and whether it plays a factor, stating:

“Luckily, I am old and have done it a lot! Our 2018 season is going really well so far.  We have four wins, all on different type tracks and in different cars. We have pretty much run in the Top 5 all year long. By the time I get to your race (The LRR 100), I will have run 35 races. We ran 9th in the Little 500 on asphalt in a Sprint car.  I ran 3rd in a late model in Alaska a couple of weeks back.” 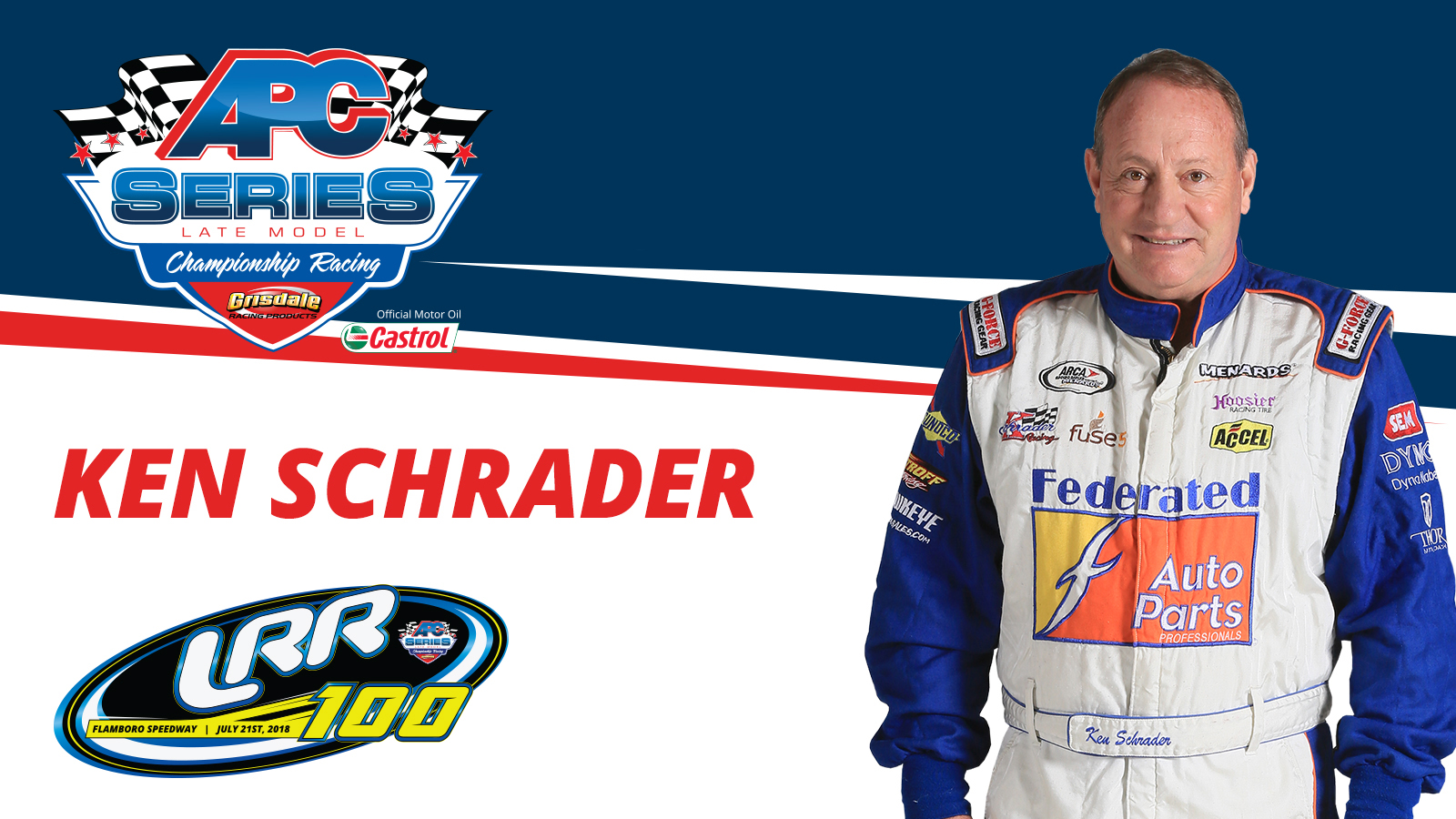 Flamboro Speedway, located in Millgrove, Ontario just a few minutes North West of Hamilton, Ontario, is a tricky single lane 1/3-mile track. It has played host to many exiting APC Series events with JR Fitzpatrick claiming victory there earlier this season. Race fans and media dubbed the 2017 running of the LRR 100 as one of the most exciting events of the 2017 season as LRR driver Andy Kamrath held off series champion Brandon Watson for tough and grueling 100 laps.

Ken Schrader was asked what experience if any he has at the 1/3-Mile. Shareder explained:

“I ran there a long time and have been watching some videos, which will help.  Looking forward to returning to Flamboro.”

Track promoter and announcer Gary Colling was asked about Ken Schrader coming to race at the speedway, and responded with: “Hot Damn! This is going to be big, we are very excited for Ken to be joining us for the LRR 100, and we are going to pack the grandstands Saturday!”

This event will be Schrader’s second overall event with the APC Series and 3rd race after last season’s double header. Schrader enjoyed mixed success his first time around placing 8th in the first event and a DNF in the second after getting caught up in a front stretch incident. Schrader was asked if having experience around this group of drivers will translate to success.

“Running with same drivers will help. But with track being different, that will only be so much help!”

Car Owner Steve Laking was asked about his expectations for the event:

“I think it will be easier this time around as I know how little pressure he brings. Flamboro is a tough single lane track so just a good solid finish would be a success. My team is putting our all into it so he has a competitive car. So, we’ll hope for the best!”

The APC Series in partnership with Flamboro Speedway is thrilled to make this announcement and we look forward to having Ken Schrader in the field Saturday, July 21st for the London Recreational Racing 100.