London, ON – Since 2015, the APC United Late Model Series has been a staple in the Ontario short track racing scene, that will continue once again in 2023, with a big twist. Fans will once again be able to spend their summer long weekends with the series at their favourite track, but for the first time since the series inception, the series will hold events with more than 100 laps. This has been longed by drivers and fans alike, and the series has listened. There will continue to be the traditional 100 lap events throughout the schedule, with three marquee events increasing from the traditional 100 lap length distance. Two events will be 150 laps (Sunset and Sauble), and the championship race will move to a 200-lap event at Delaware Speedway.

Luke Ramsay, the President of the United Racing Series mentioned, “adding three extra lap races along with the six 100 lap events will be exciting for our fans and competitors. We feel it’s a great time to continue to evolve as a Series as long as it makes sense for all involved and these events will add different strategies for everyone involved and it will also give our fans a little variety, we can’t wait to get going”. 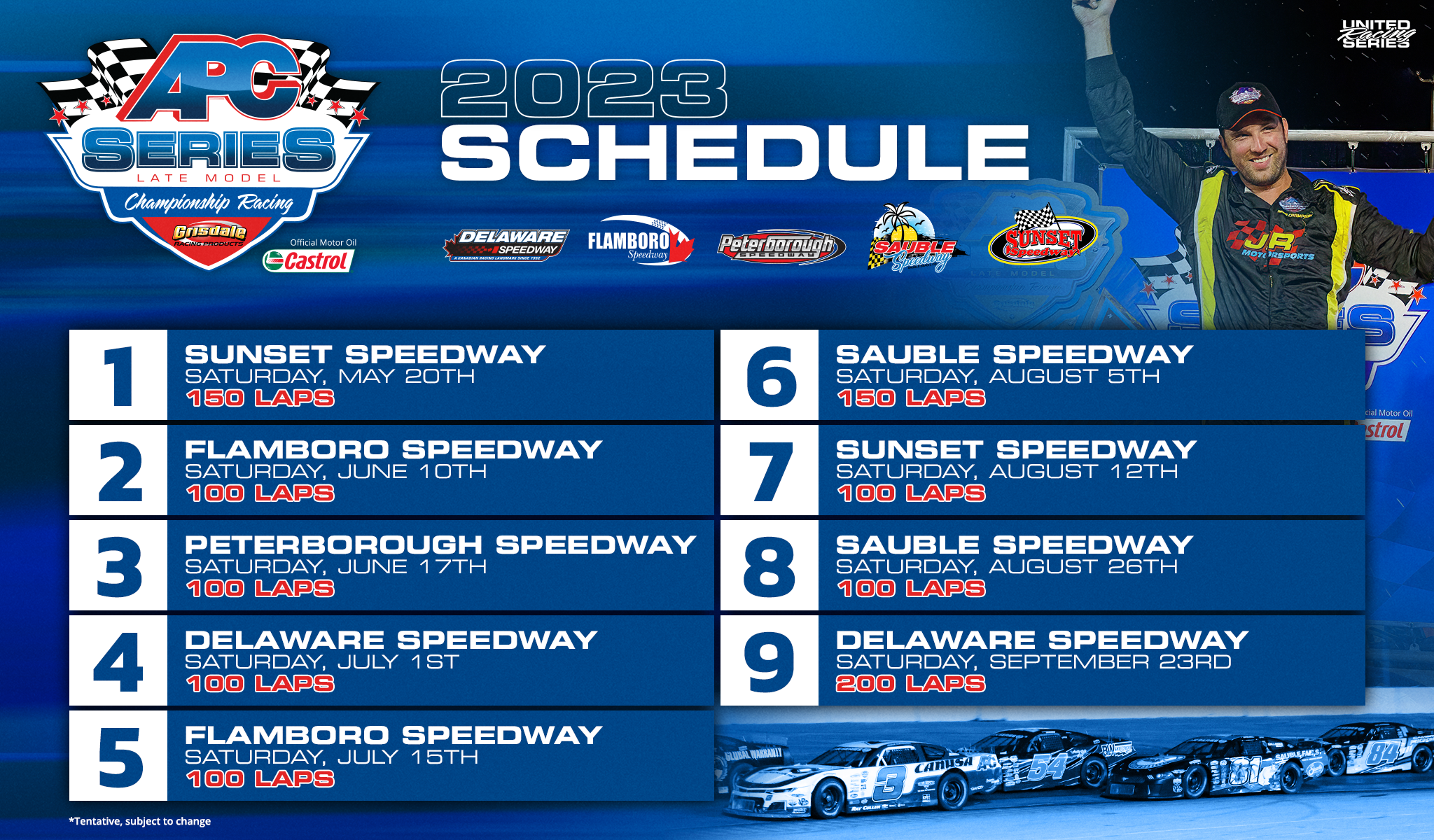 The series will kick-off on its familiar Victoria Day long weekend, Saturday May 20th, at Sunset Speedway, located just outside Barrie, Ontario. Fans, drivers, and sponsors alike will be able to flock to the speedway campground for this long weekend event and the official start of summer in Ontario. This will be the first of the three marquee events, being the first ever race to be over 100 laps, with the opening Sunset event being 150 laps.

After Sunset, the series goes on a summer stretch of four 100 lap events beginning with Millgrove Ontario’s Flamboro Speedway. Flamboro will host a pair of events in 2023, starting with event number two on the series schedule, June 10th, followed by event five on July 15th.  The stars of the APC Series will once again visit Canada’s toughest 3rd mile, Peterborough Speedway, on June 17th for the third event on the schedule. From there drivers and fans will celebrate the Canada Day long weekend at Delaware Speedway, located just outside London, ON.

The teams will enjoy a layoff following the August 26th Sauble event and can allow a summer of hard work to marinate before the final event of the season and third of the big new marquee events. The ninth and final event of 2023 will see the APC Series head back to Delaware Speedway for a massive 200 lap event where the 2023 series champion will hoist the mammoth 42-pound series championship trophy.

More information such as race formats along with sponsorship announcements will follow in the coming months.

ABOUT UNITED RACING SERIES: The United Racing Series debuted in 2015, and immediately drew attention from around the province with the formation of the APC United Late Model Series. Fans, drivers, and sponsors alike were left wanting more after a wildly successful inaugural season that saw the championship battle come down to the final laps. The series that took Ontario by storm has continued to grow for years and has brought Late Model racing in Ontario to what it truly should be. The United Racing Series is also the home of the Qwick Wick Super Stock Series and the OSCAAR Modified and Hot Rod Series. The goal of the United Racing Series continues to bring out top talent and create a racing atmosphere that is one of a kind. www.apcracingseries.com .

ABOUT OUR PRESENTING SPONSORS

APC Auto Parts Centres - APC opened its first branch in London in 1981. Since then, 47 branches have been added to the network, which now stretches across South and Central Ontario and the Greater Toronto Area. Supply and support of APC stores is carried out from our 200,000 sq ft. state of the art distribution centre in London, Ontario. Our Mississauga location is 40,000 sq.ft. and operates as a hub servicing just-in-time inventories to the GTA stores.

Castrol - Castrol is here to serve every driver, every motorcyclist and every industry on earth. Castrol does this through Liquid Engineering. That means creating high performance oils, lubricants, fluids and greases for every application you can imagine.

With more than 40 years in the business, whether it’s for your new car, an old car or your race car, our people have the expertise to help you with whatever you need.